An article from the Northern Echo:

To bee or not to bee? - A scary question

Bees are dying in huge numbers around the world, putting pressure on the already fragile food chain. But as media attention about the issue grows, so do the number of people working to buck the trend. Vicki Henderson investigates.

It’s estimated that one in every three mouthfuls of food we eat is dependent on pollination by honeybees. And not just honeybees — hoverflies, wasps, bumblebees, moths and butterflies all play a vital role in feeding people through the pollination of crops. But the number of insect pollinators across the globe has been shrinking dramatically since the 1950s, due to intensive agriculture and land use, disease, the loss of wildflowers, and the use of pesticides, insecticides and herbicides.

Some experts have painted an apocalyptic picture of a future without bees, warning that our main sources of food could be wiped out in only a few years if numbers continue to decline. More worrying is a phenomenon known as colony collapse disorder (CCD), which has seen the number of colonies across the US plummet by up to 80 per cent in recent year, with falling numbers also reported in countries as diverse as Germany, Japan and Egypt.

In the UK, bee colonies have their own problem in the form of the varroa mite, a parasite which lives off the blood of bees, passing on disease and shortening their lifespan if not treated by beekeepers.

The most recent figures from the British Beekeepers Association show that the North of England has the highest rate of winter losses, with 17.1 per cent of colonies dying out last winter — which the association calls “unacceptably high”. But as the number of bees decline, so do the number of bee-keepers, something Roger Chappel, secretary of the Darlington Beekeepers’ Association believes is just as worrying a trend.

Mr Chappel, who has an apiary of more than 20 hives at his home in Brafferton, on the outskirts of Darlington, said: “In the UK bee keeping is a hobbyist’s activity — there are not too many bee farmers out there.

“In the last decade or so there has been a decline in the number of beekeepers in the UK, probably a 50 per cent reduction. What we are trying to do is redress that balance because without bee-keepers, bees always struggle.

“There are a lot of community groups who are latching on to the fact that we need the bees, not so much for honey, but for the vital contribution they make to pollination.”

In fact, in the past three years, since the plight of bees and insect pollinators was picked up by the media, the numbers of beekeepers have soared, with more than 23,000 people registered with the British Beekeepers’ Association.

In Teesside, Middlesbrough Environment City (MEC), which promotes healthy and sustainable life-styles, created the grant-funded Bee Friend project, run in partnership with the Cleveland Beekeepers’ Association and Middlesbrough Council, to meet a resurgence in local interest. 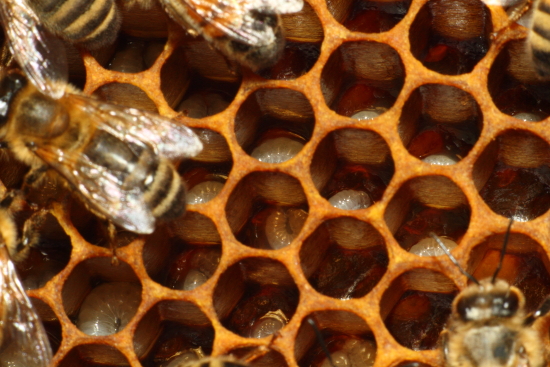 PUTTING FOOD ON OUR PLATES: Every third mouthful we eat depends on honeybees

Catherine Boyle, of MEC, who manages the Bee Friend project, said the renewed interest in bees is the result of a combination of factors. “There’s lots of media interest in the subject. It’s also a bit geeky and scientific and people respond to that. People either love it or hate it, and end up keeping hives, even if they started out with only a vague interest.”

The British Beekeeping Association has urged more people to get involved with bees, either by setting up their own hive, which is relatively simple to do with training, or by planting bee and insect-friendly flowers and shrubs in their gardens.

The five most common pollinators seen in British gardens:

There about 25 species of bumblebee in the UK, but only about six are common. Bumblebees have round, furry bodies and a recognisable bumbling flight. Bumblebees live in small colonies, usually in abandoned bird boxes and compost heaps.

The common carder bee, Bombus pascuorum, has shaggy hair and can be seen at flowers late in the year. It is one of our most common bumblebee species, found even in the centres of large cities.

Kept by beekeepers, they are very similar in size to wasps but are mostly black in colour, with light tan banding in some cases. They form large colonies of workers, headed by a queen – individuals cannot live long alone.

Common across the world, they are often seen hovering or nectaring at flowers. In some species, the larvae eat aphids and are recognised as an important natural enemy of pests. Often mimic bees and wasps to ward off predators.

There are seven species of social wasps found in the UK. All common wasps have sharp, tapered abdomens, striped in black and yellow. Their heads are mostly black. All wasps have a great reputation for stinging but are vital for killing garden pests.