Located behind the scout hut on the Grange, this was an ill-kempt, overgrown bramble area transformed over time by EPICH into a pleasant little suntrap, for the benefit of resting dog walkers or just those people out for a gentle stroll.

Planning began in 2013, and work to clear the brambles was begun in spring 2015.  The original plan had been to clear them all, but it was clear that the prickly thicket provided cover and food for birds and wildlife, so only around half were taken out.  In 2016 japanese knotweed complicated the clearing and had to be dealt with professionally.

By 2017 the brambles were cleared, leaving an area originally intended to be turfed but in fact now laid with bark chippings, covering approximately 30 m2 with a picnic table.  Also in 2017 1200 mini daffodils were planted here, bordering the new all-weather path. 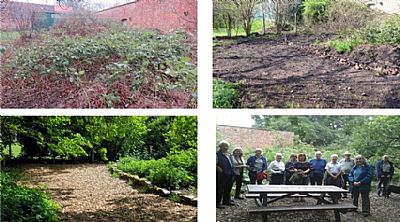 EPICH continues to look after the area with a "light touch", keeping the brambles from encroaching but leaving enough of a thicket for wildlife shelter, and clearing litter.