In 2016 EPICH instigated a project to develop a circular, perennial wildflower meadow within the circuit of the model railway, after consideration of a number of possible sites. 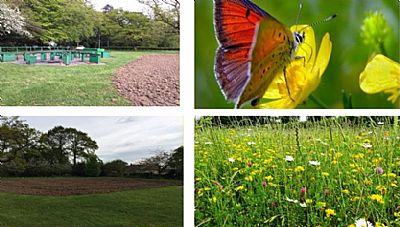 Perennial meadows take some time to establish but the impact in the first year was very positive.  By the end of year two, however, the thickness of the growth and lushness of the grass made cutting very difficult, and the flower had not been as rich and attractive as in 2016.  So in Spring 2018 yellow rattle was added, to parasite on the grass and weaken it; more was added as seed in 2019 along with cowslip and native bulbs to extend the flowering season, but it became clear by 2020 that this project was not going to be a success.

Ultimately a combination of knapweed overwhelming other species, and the logistical difficulties for the grass mowers in skirting round the meadow meant the meadow had to be abandoned.  Plants will be lifted and transplanted to the Heritage Orchard where a meadow will be established during the 2020s.